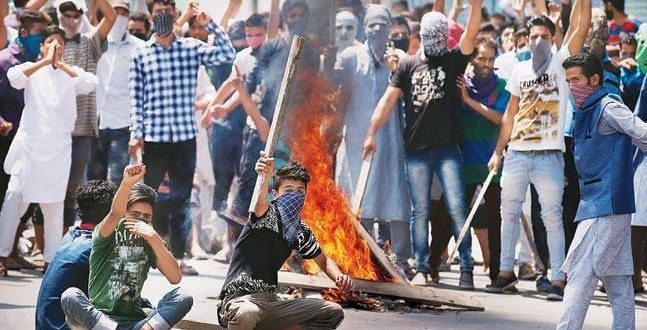 Constitution of Jammu and Kashmir and its relation to India –

Constitution of Jammu and Kashmir in relation to Pakistan –

Article 48 of the constitution of Jammu and Kashmir talks about the part of the Kashmir which is administrated by Pakistan and terms it as “Pakistan Occupied Kashmir”. The article also recognizes the 24 seats from the Pakistan occupied territory and mentions that these seats shall remain vacant till Pakistan ceases to occupy the Kashmir territory and the said area shall be excluded in delimiting the territorial constituencies till that time (article 48 0f part VI).

The brutal Exodus of Kashmiri Pandits –

To understand the timeline of Kashmir we will use the example of “Our Moon has Blood Clots” written by Journalist Rahul Pandita.

The story starts with the murder of the political activist, Tika Lal Taploo, who was shot dead by armed men outside his residence.

This was a time when massive crowds of Muslims gathered in mosques across the valley shouting anti-Hindu and anti-Indian slogan. The blogs of many Kashmiri Pandits also state that the mosques themselves were announcing statements demanding the Kashmiri Pandits to leave their property and woman behind and run for their life. The night of 19 January was the start of the exodus of the Kashmiri Pandits. In the next few months hundreds of Kashmiris were tortured, killed, raped and by the end of the year, 3,50,000 pandits have to leave the valley and settle in various parts of India.

Seven Kashmiri Pandits were dragged out of their house and were killed by terrorists in Sangrampora village.

23 Kashmiri Pandits including women and children were shot in cold blood in Wandhama Village.

24 Kashmiri Pandits including infants were shot in cold blood in Nadimarg Village.

If you want to know what went down on the night of 19 January 1990, here’s an excerpt of Coj Tej Kumar Tikoo’s book “Kashmir: Its Aborigines and Their Exodus”, describing the night of horror –

“As the night fell, the microscopic community became panic-stricken when the Valley began reverberating with the war-cries of Islamists, who had stage-managed the whole event with great care; choosing its timing and the slogans to be used. A host of highly provocative, communal and threatening slogans, interspersed with martial songs, incited the Muslims to come out on the streets and break the chains of ‘slavery’. These exhortations urged the faithful to give a final push to the Kafir in order to ring in the true Islamic order. These slogans were mixed with precise and unambiguous threats to Pandits. They were presented with three choices – Ralive, Tsaliv ya Galive (convert to Islam, leave the place or perish). Tens of thousands of Kashmiri Muslims poured into the streets of the Valley, shouting  ‘death to India’ and death to Kafirs..

… The Pandits could see the writing on the wall. If they were lucky enough to see the night through, they would have to vacate the place before they met the same fate as Tikka Lal Taploo and many others. The Seventh Exodus was surely staring them in the face. By morning, it became apparent to Pandits that Kashmiri Muslims had decided to throw them out from the Valley. Broadcasting vicious Jehadi sermons and revolutionary songs, interspersed with blood-curdling shouts and shrieks, threatening Kashmiri Pandits with dire consequences, became a routine ‘Mantra’ of the Muslims of the Valley, to force them to flee from Kashmir…”

Kashmir is the most highlighted hotmess in our nation right now, the reason being the armed rebellion of a certain group backed by Pakistan. Pakistan’s ISI has directed its proxies in the Kashmir Valley to intensify their operations against the security forces. Women and youth are being instigated to resort to this form of protest. But if one was to look at the facts of it, then one will realize that the state of Jammu and Kashmir is divided into Ladakh, Jammu, and Kashmir. The facts state that there is no disturbance in the areas of Jammu and Ladakh, it also states that the disturbance happens in just minor districts of Kashmir which is lined with Pakistan Occupied Kashmir. Now if one does rigorous research on why even the disturbance occurs in the minor districts of Kashmir then it will be quite clear that one of the main reason is the repercussions of the Article 370 of the Indian constitution which guarantees special temporary provisions to the state of Jammu and Kashmir which means all the provisions which are applicable to all the states of India are not applicable to the state of J&K. It ensures that no private corporate body can be established there. Now if the common citizen of Kashmir does not have a job of 9 to 9 then they will opt for throwing stones and they are easy to be radicalised in hands of Islamic religious leaders instigating them for jihad. They will opt for the rebel resulting in a state of disturbance. The plain solution for this state is revocation of article 370 from the Indian constitution. And this is just not my ideology but many jurisprudence holds the same ideology. Even our forefathers, the creator of our constitution put down article 370 in our constitution on “temporary” bases. And it was supposed to be temporary, the condition of Kashmir deteriorated by the prolonging of not yet repealing the article 370 from the Indian Constitution. Kashmir will take a sigh of relief the day our government will take a bold and courageous step in correcting what should have been corrected before.

Previous Surabhi Tiwari, new sensation in B-town has an inspiring life story as well
Next The Rule of Law and the State of Jammu & Kashmir