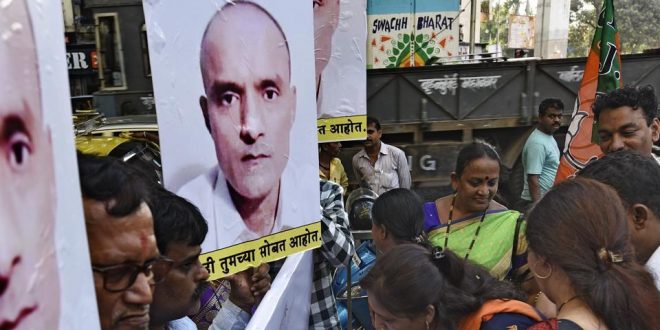 Kulbhushan Jadhav is an Indian citizen and a former Navy man who has been arrested in Pakistan’s province of Balochistan on the grounds of terrorism and spy work on the behalf of Indian Intelligence Agency, Research and Analysis Wing. But the question which is highlighted is how much Pakistan’s words hold credibility, as the Indian Government has denied all the accusation of Kulbhushan Jadhav’s involvement in any kind of spy work. As reported by the Indian foreign ministry on 10 April 2017, Kulbhushan Jadhav was “kidnapped last year from Iran and his subsequent presence in Pakistan has never been explained credibly.”

Let’s hear what the Pakistan government has to say about all of this, the Pakistan government stated that Mr. Jadhav was a former Indian Navy commander who, now have been involved in subversive activities inside Pakistan and they also state that they arrested Mr. Jadhav during a counter-intelligence operation in Balochistan on 3 March 2016. The Indian Government in reply to this did recognise Mr. Jadhav as Former Navy Commander but denied the accusations of him being a spy for the intelligence agency and also maintained their statement of Mr. Jadhav taking early retirement and being kidnapped from Iran. Pakistan with their delusional accusation moved further and sentenced Mr. Jadhav to death on 10 April 2017 by a field general Court Martial in Pakistan. Following this event on 18 May 2017, the International Court of Justice stayed the judgment of Field Court of Pakistan. India’s and Mr. Yadhav’s interest is being advocated in the International Court of Justice by Harish Salve, while Khawar Qureshi is advocating on the behalf of Pakistan.

The misadventures of Mr. Chandan Nandy

Following all this event, the Quint, a famous online news portal published an article stating that the Journalist Chandan Nandy had a talk with two former Raw Chiefs, of whom one was opposed to the idea of employing Mr. Jadhav as a spy but Mr. Jadhav was taken in by the other Raw Chief. But the loophole in his story was the fact that there was no name given under his article, and not only that, the Quint took down Mr. Nandy’s article on the grounds of checking facts. Even the Quint had doubts about their journalist’s story. And now the site stays silent on this subject as if they never entertained this article out in public. I guess this is enough, to sum up, that there are major loopholes in Mr. Nandy’s credibility in his article.

While all of this was happening, Advocate Khawar Qureshi used this article as gospel truth in International Court of Justice but he has failed to look at the obvious non-credibility of the article. Let’s dig a bit more in why the story is not credible, and surely not at all credible if that article is being used to judge a person’s life. The basic principle of law is “innocent until proven otherwise”, so how come can we make such drastic decision based on something that looks, feels and most probably is fiction.

Firstly, not one but two RAW Chiefs coming out and talking to such conspiracy theorist (Mr. Chandan Nandy) and even if his article holds the truth, it is far from believing that two RAW Chiefs will ever give out such sensitive and confidential information even off record to a journalist that will not only bring an end to an Indian’s life but also slander India at international level.

Secondly, and yes I used the word “Conspiracy Theorist” because Mr.  Chandan Nandy is a performer when it comes to webbing and designing conspiracies and I can justify on fairgrounds how it is true. Let’s talk about Mr. Nandy’s coverage of Sheena Bora Murder case in Mumbai in 2015. Mr. Nandy published stories on how Sheena Bora was not the daughter but the sister of the alleged killer, Indrani Mukherjee paving a whole new road and theories and endless conspiracies. He also claimed how Sheena Bora was pregnant at the time of the murder. None of it was backed up by any evidence, facts or any investigating agencies.

Thirdly, we can never forget about Mr. Nandy’s story of the imaginary surgical strike that took place on 20 and 21 September, while the real Uri Surgical Strike took place between 28 and 29 September. After this, he even proudly announced how he already wrote about the surgical strike and also in his article he stated how the Indian army used helicopters to cross the LOC and killed around 20 terrorists. After when director general of military operation of Indian army stated the real facts, The Quint ran a revised version of their story saying that the first strike took place on 20 and 21 September, and changed a few facts of how the Indian army didn’t use any helicopter and killed around 10 to 12 terrorist. They said they confirmed the story through unnamed, unidentified “various sources” across the army and government sources. I wonder whatever facts they collected was totally off the record or even real at all because none of it sums to make up any credible story or article. And even if the Indian government were to advertise their surgical strike a week earlier why would only Mr. Nandy get his hands on that first, and why no other journalist has been able to verify Mr. Nandy’s imaginary first surgical strike?

I am guessing you just had enough by now to make you believe or rose a suspicion at least if Mr. Chandan Nandy’s story on Kulbhushan Jadhav hold any credibility or not but hold on it’s not over yet. If I have failed you by now in justifying why I believe Mr. Nandy is nothing more than a conspiracy theorist or I will give him the title of fictional writer then I would like to talk about his conspiracy on how he believed that the demonetisation of Indian currency of rupees 1000 and 500 was actually, according to him, was done as a deal between Prime Minister Narendra Modi and CIA, Mr. Chandan Nandy quotes “American aid agency, USAID, which was used at least once by the US Central Intelligence Agency (CIA) to launch a covert intelligence operation in India, has partnered with the Narendra Modi government to create a network of more than 40 organisations to increase the usage of digital payment systems, particularly among low-income consumers.” I have to accept Mr. Nandy is way too good when it comes to frictional writing, if he switches from being a journalist to a frictional writer, I bet he will get the best seller and all the attention that he really wants. But the most surprising thing about his article was that The Quint took it down as well. So the story on Kulbhushan Yadhav was not the first non-credible story. It has happened before and happening again is a pattern.

Well, I guess this is very clear on how we can not hold the articles or stories credible from a site who usually uploads stories to make mass hallucinations and after entertaining them for a while takes them down. And we can surely not hold them even a bit credible when a man’s life is hanging by a thread. But the funny part is how Pakistan is advertising the Quint’s false stories as if it is universal truth.

Previous Caste based Reservation: Exploitation of a Privilege
Next Pakistan and the anatomy of terror