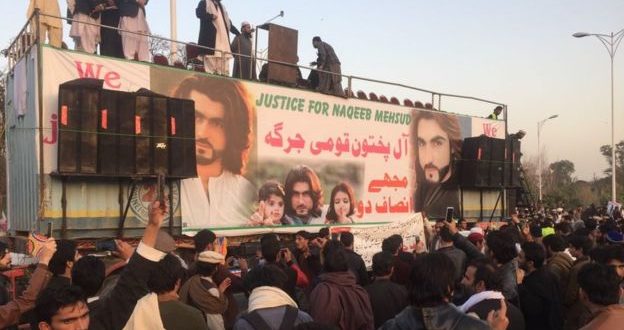 Pashtun Long March was organized by the Pashtun Protection Movement, formerly known as Mehsud Protection Movement, which was led by Manzoor Pashteen. The movement started after the encounter of Naqeebullah Mehsud, a Pashtun model who resided in Karachi. Naqeeb was linked to terrorists groups without any evidence and killed by Rao Anwar. In response, Naqeeb’s tribe started a march to ask for justice. The march had started in Dera Ismail Khan, however, it turned into an “all-Pashtun Jirga”- a sit-in- when it reached to Islamabad. The sit-in which was joined by eight thousand to ten thousand Pashtuns from different parts of Pakistan, was the first non- violent movement in decades. The march that had started to ask for justice for one person turned into a movement that crossed Pakistan’s borders. It also adapted the name Pashtun Long March (often written together in a hashtag).

Demands presented by the movement were to arrest the person who has killed Naqeebullah, Rao Anwar, and justice for those Pashtuns who have lost their lives in extrajudicial killings; Ending the extrajudiciary killings of Pashtuns; Not to open fire on innocent Pashtuns ; Bringing Pashtun missing persons back to their homes or before the court of law (mostly those missing persons were forcefully abducted by the army and police); Clear mines in FATA. The Pakistani government accepted these conditions after nine days of sit-in in Islamabad and promised to implement it within a month. The leader of the movement said that, after a month they will come back if the government did not fulfill its promises.

The acceptance of conditions seems to be a new way for Pakistan to diffuse the threat posed by the Pashtun unity.  The sit-in brought many Pashtuns together, and united them after decades of conflicts. They left their tribal identities and marched for justice and freedom.

The Pakistani government was quick to realize the potential of this movement, and tried to stop it by manipulating the organizers and sending politicians to the sit-in.

But what led to this movement and sit-in that shock Pakistani establishment?

One of the conditions presented by the Bush administration after its “You are either with us or against us” statement, to Pakistan was to fight terrorists  and end terrorist activities.

Pakistan saw war on terror  as an opportunity  to receive as much fund as it could by those who are fighting war on terror.

Pakistan joined the War on Terror, and to prove that they are keeping their end of the bargain, they started victimizing Pashtuns and other minorities. They started military operations in FATA and Waziristan, while real terrorists were enjoying their luxurious lives in Karachi, Lahor, and Islamabad.

Manzoor Pashteen, the leader of the movement, said and his Facebook live today, that fighting  under the label of “fighting terrorism” has turned into a business [for Pakistan].

The sit-in proved that Pashtuns are not terrorists but victims of terrorism imposed by Pakistani government.

– By Habiba Ashna, Afghan Pashtun activist based in United States. She tweets at @HTasalla and blogs at habibaashna.blog