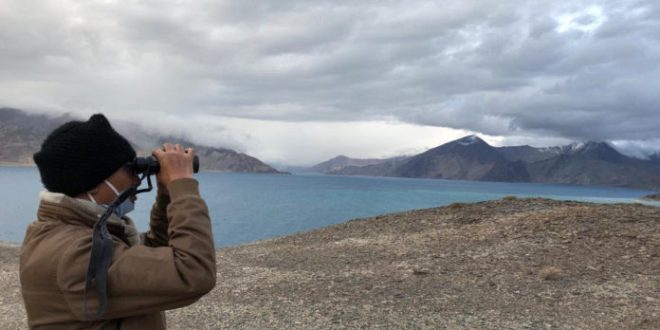 Amid the standoff with China, Ladakh MP, Jamyang Tsering Namgyal, toured border areas of eastern Ladakh and promised safety, security and overall development to residents along with Pangong Lake near the Line of Actual Control (LAC) where tension is prevailing.

In his three-day tour, Ladakh MP visited Thakung and Chartse Posts and examined the actual position at Finger 4 and other posts.

Namgyal also visited the last villages of the area including Phobrang-Yurgo-Lukung, Spangmik, Maan-Merak, Khagtad, Chushul and Shayok at the Galwan Valley side and interacted with the residents and heard their grievances, especially about the ongoing situation.

During his tour, he stayed overnight in Chushul which holds prominence as it was the site of a fierce battle during the 1962 India-China war and also interacted with the village representatives of the region.

During the visit to the border, the MP said: “We don”t want any confrontation with our neighbouring countries and we strongly believe in peace, progress and prosperity.”

“We have a very competent government at the Centre under the leadership of Narendra Modi as Prime Minister who is very patriotic, dynamic and committed for the overall development of a well secured and very strong nation. Under the leadership of Narendra Modi, we, the countrymen, have full faith that not even an inch of Indian land would be lost,” he added.

Since the ongoing stand-off, this has been the second tour of the Namgyal along the forward border posts. He had earlier visited of Chumur, Hanley, Koyul, Demjok, Fukchey, Dungti and Tsagaon on 18 May.

After the Doklam episode in 2017 when Indian and Chinese forces saw a major face-off over the construction of a road by China, this is the first major stand-off between India and China. Several military- and delegation-level talks have been taking place between the two nations to resolve the ongoing stand-off.

Previous The Collateral Relationship Between India and Nepal: Conflicts with China
Next An analysis of Delhi Govt’s Decision to only treat Delhi COVID-19 patients