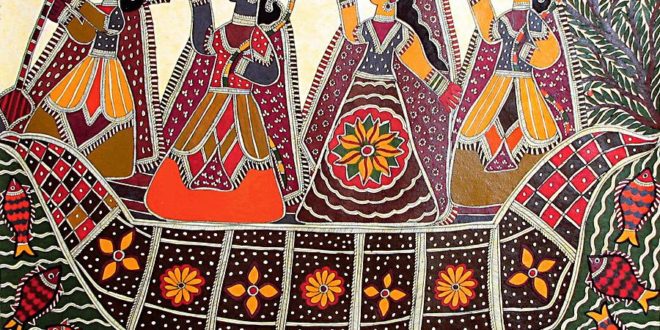 India is a country known for its cultural diversity. It is the rich cultures and the famous practices which makes India unique in the field of art. One of the most famous of art preserved in India from the golden era is the Madhubani Paintings. The origin of Madhubani Paintings was from Madhubani District of Mithila in Bihar and this is the reason it is also known as Mithila Paintings as well. It is believed by the facts and figures recorded in Bihar that the Madhubani art is about 2500 years old and dates back to the time of Ramayana. The art which is preserved from such a long tenure surely has something great about it which makes it thriving till date.

The style of making the Madhubani paintings is unique in its own way:

Madhubani paintings are made from paste or powdered rice and are done using fingers and twigs along with matchsticks and pen nibs. Madhubani Paintings were made in the form of wall art in the region on the freshly plastered mud walls and floor of huts which later transformed into various forms like cloth, paper and canvas paintings. The colours used in the paintings are made out of natural dyers like turmeric, charcoal, sandalwood, indigo etc. The paintings emphasize on a number of geometric patterns of natural elements including flora and fauna of various types.

The culture has a lot to do with the style of paintings:

Madhubani art has a lot to do with the men and its association with nature and the various rituals and the deity from the ancient times specially from the region of Bihar. The paintings reflect the cultural heritage of Bihar in the older times and the creativity that resided in the minds and hands of the people who designed this unique graffiti which continues to attract a large number of people even today. The most important point to be noted is that the paintings are still made in the region of Bihar which makes it rare throughout the country and the original one’s only available in Bihar and is even exported to foreign countries.

It’s all about unique designs that made a connected to the roots:

When we talk about culture and heritage these heavy words have their roots deep in the history of India and so has the Madhubani Paintings which has designs inspired by the olden days as one cannot find stylish men and women or any modern surroundings. The base may have changed from walls to paintings and cloths but the art form has remained the same from years which is one of the major reason of this ancient art form being preserved till date. The design is what has not changed or we can say changed but the trend is the same which makes it different.

Madhubani paintings are the Jewel of Bihar:

Madhubani Painting is still practiced in Bihar and the people of the state are working hard to preserve this rare form of art that originated from here. Madhubani paintings are very significant till date as they have been preserving the rich cultural heritage of Bihar and this legacy has been continued and will continue to attract people with its unique design and rich past which will always be admired by people specially those who are interested in art, culture and history.