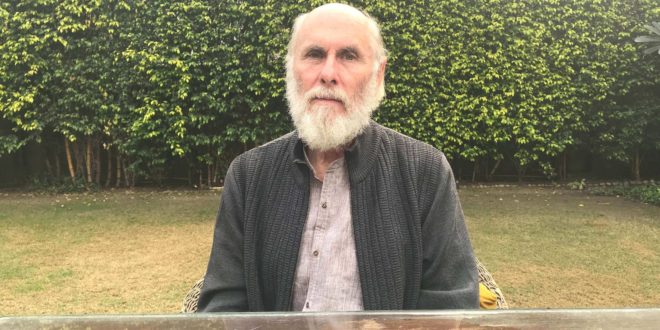 – By Dr. David Frawley, Dr. David Frawley a.k.a Acharya Vamadeva Shastri is a recipient of the prestigious Padma Bhushan award, one of the highest civilian awards granted by the government of India. He has written more than thirty books on topics such as the Vedas, Hinduism, Yoga, Ayurveda etc published both in India and in the United States. He is the founder and director of the American Institute of Vedic Studies in Santa Fe, New Mexico which offers educational information on Yoga philosophy, Ayurveda, and Vedic astrology.

India achieved its political independence in 1947, but did not establish the necessary intellectual independence to go along with it and effectively take the country forward.

India’s Independence Movement honored the Bhagavad Gita as its most important book since the time of Lokmanya Tilak in the late nineteenth century. India’s independence leaders drew strength and inspiration from the country’s Yoga and dharmic traditions. They invoked India’s own idea of Swaraj in challenging British foreign rule. They questioned British distortions of history and politics, and resisted their religious conversions efforts. An extensive cultural battle between the British and the Indians occurred that the Indians eventually won by invoking their own great dharmic civilisation.

Leftist takeover of the Indian Mind after Independence

Unfortunately – and sadly for those who honor India’s civilisation – after 1947 India’s ruling intelligentsia did not take this intellectual independence movement forward. India’s post-independence intelligentsia intentionally, methodically and resolutely moved the national discourse backwards into denigrating western views of India, its culture and history that the independence movement had but recently thrown off. This formed a cultural reversal of unparalleled proportions that brought chaos into the minds of people and confusion into India’s diplomatic presentation of itself to the world of nations. Yet it occurred under the guise of progressive leftist thought, not simply from the old colonial arrogance.

The new generation of India’s thinkers, academics and media personages after independence – including political leaders like Nehru – abandoned the intellectual and cultural gains of the independence movement, in what could be regarded as a massive cultural betrayal of the country and civilisation of Bharat. They further entrenched an alien colonial view of India into the heart of the educational system, trying to dissociate independent India from its venerable history and world-respected civilisation going back thousands of years.

The great icons of the independence movement such as Swami Vivekananda, Swami Rama Tirtha, Sri Aurobindo and Rabindranath Tagore – including Mahatma Gandhi who staunchly criticised western civilisation – were replaced by Nehruvian intellectuals and Marxists who ended up dominating India’s intellectual discourse and chartings its course, looking at their own traditions as the main enemies of developing the country.

Besides their awakening in India, Indic thought and its dharmic traditions have been spreading throughout the world, influencing millions of people, including great thinkers and educated groups in countries East and West. This spread of India’s dharmic teachings began with the same group of thinkers like Vivekananda and Aurobindo who inspired the independence movement and made a clarion call to return to Yoga, Veda, Vedanta and Buddhism, not merely to throw off the British yoke but to discover a higher truth.

Indic thought placed in a modern language has a tremendous appeal to open and enlightened minds everywhere. Its science of consciousness and understanding of the subtle energy patterns of the universe remains at the cutting edge of modern science. Its depiction of the cosmos and the human being as a center of universal intelligence puts to shame the social and psychological theories of the Left.

The broader teachings honored behind India’s Independence Movement came to guide many people in the world, while India’s new leftist intelligentsia tried to suppress them in India itself. India’s new intellectuals were not part of the worldwide spread of India’s spiritual teachings. They stridently opposed it, criticising India’s gurus and godmen, yoga traditions, mantra and meditation practices, and regretting their global influence.

Need to Confront both the Shadows of Colonisation and Recolonisation

This leftist recolonisation of the Indian mind was perhaps more dangerous, devious and insidious than what the British had accomplished. It glorified those who exhibited a colonised mindset as true leaders of a country that they had invented, with Marxist historians and members of India’s Communist Party made into the true interpreters of India’s ancient culture going back to the Vedas – which became but a sidelight to their new idea of India as a modern socialist state. They did lip service to Mahatma Gandhi and the independence movement while dismantling its intellectual and spiritual infrastructure.

Long Term Consequences of Colonisation and its New Offshoots

The British replaced traditional Indian education in favor of its own anti-India educational system. While modern education had its tremendous benefits for science and technology, its view of society and spirituality was regressive in the Indian context. This British mentality unfortunately became the basis for the educational system of independent India and influenced the media, politics and judicial system in a way that embedded prejudices against India’s own civilisational contributions.

The promotion of Christianity during their period of rule in India did not end after independence. After independence more freedom was given to Christian missionaries who worked to divide the country along religious lines, including clandestinely through their own NGOs. Right wing Evangelical groups from America have been most prominent and still promote the colonial view of India as a land of superstition, idolatry and oppression, yet they are strangely protected by the Left in India.

Islamic rulers in India, with few exceptions, promoted Islamic culture, religion, and education over older Indian traditions and institutions. After independence, in which Pakistan opted to become an Islamic state, this Islamic colonisation of India did not end but assumed a new and more dangerous form.

The Islamic colonisation of India experienced a revival through petrodollars and the numerous Saudi inspired madrasas that dominate Islamic education in India today. Graduates of such regressive learning look to a new caliphate and sympathise with Pakistan. They are now promoting Islamism and in some instances supporting Jihadi terrorism.

Communism in Asia did more to damage traditional cultures, and resulted in more genocide than perhaps colonial rulers. The Chinese Cultural Revolution is the most notable of such instances. The Left, though ostensibly against colonial rule, is still motivated by a Eurocentric political ideology that is hostile to and seeks to eliminate the older cultures of Asia. The Left merely offers an alternative form of colonialism under the pretext of fighting imperialism.

We should carefully note that Buddhism in Asia has been attacked by the Communists as much as Hinduism has been by the Left in India, and has been severely marginalised and denigrated at educational and political levels, often condemned as fascism. This suppression of Buddhism continues dramatically in the case of Tibet that Communist China is still trying to destroy at a cultural and social level.

The result of these colonisation and recolonisation movements – whether British, Islamic, Christian or leftist – is that India’s educational system, cultural institutions, and media houses remain profoundly ignorant and blindly negative to the greatness of India’s older civilisation. They are often secular missionaries, if not proponents of western theologies, trying to complete the cultural takeover that the British had set in motion.

To place the debate on colonialism in a broader context today, the noted clash of civilisations is also a clash of cultural influences and colonial expansions. Whether it is multinational businesses, global media, global arms sales or drug sales, missionary or jihadi activity, movements of refugees, even the guise of human rights, the same type of pushing for cultural dominance continues as part of a broader clash that includes both the vestiges of colonialism and its new offshoots.

India must not merely erase the shadow of colonialism but needs to compete in this new cultural clash, in which the strength of its inherent culture, art and spirituality can prove resilient.

India’s educational system, especially textbooks, requires a thorough rewriting by scholars decolonised from both colonial and Marxists views. A new Bharatiya media and academia needs to prevail. This requires a cogent, inspiring, yogic model of the country that highlights India’s great independence thinkers. It should embrace the global spread of India’s dharmic traditions and new scientific paradigms.

India needs to create a new dharmic intellectual class rooted in the spiritual traditions of the country but able to communicate them according to the new information technology. India needs to reclaim its yogic culture as its soft power to restore its cultural influence on Asia and the world.

Just as the western, Islamic and Christian worlds have their critiques of Indic thought, so too Indic systems of thought should present critiques of western thought, not simply to be contentious but to create a deeper understanding. India’s spiritual conscience must awaken to guide the world. Western liberal values are not as truly ethical or compassion as yogic and dharmic values.

Yet while it is crucial to correct distortions, it is also necessary to project positive models of Bharatiya culture to the world that are relevant to all humanity. A proactive rather than just reactive policy is required.

Festivals of India’s culture, Yoga and spirituality should be promoted. Vedanta should be highlighted in education along with meditation as a practice. Yoga and Ayurveda should be brought into medical treatment and health care for body and mind.

The Indic mind brings in a dimension of consciousness and higher intelligence that is not trapped in religious beliefs, on one side, or mere information and mental concepts, on the other. It is not simply a matter of decolonising the Indian mind but of expanding the systems of Indic knowledge for the benefit of all humanity.

This article was first published in the Organiser and vedanet.com