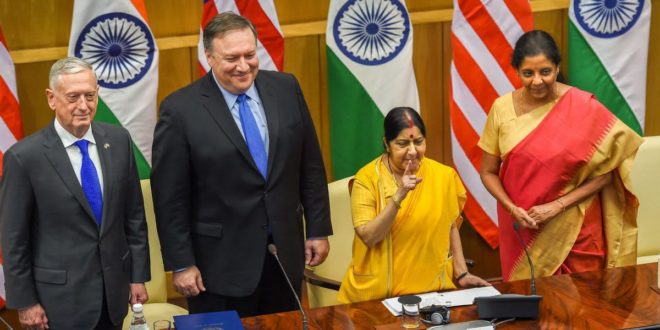 The Arithmetic of India-U.S. Relations and the Russian Factor

The 2+2 dialogue is a relatively new phenomenon which provides states with an opportunity to combine the discussion on security matters with general issues of international and bilateral affairs. Such a format helps widen the agenda and yield more fruitful results. The ‘recent 2+2 talks involving James Mattis, Mike Pompeo, Nirmala Sitharaman and Sushma Swaraj is the most high profile official meeting in 2018 as Donald Trump and Narendra Modi have not had summits since the previous year.

The addition of the two plus two format turned out to be an uneasy arithmetic task for India and the U.S. as the meeting was postponed two times and was eventually held amidst some trade tensions. However, the outcomes of this inaugural high-level dialogue show that the officials of the two countries succeeded in ironing out differences and achieving the expected outcomes. Although the immediate results of the negotiations do not reveal the full picture of the future dynamics in India-U.S. cooperation, the joint statement on the ministerial dialogue provides enough evidence for making several assumptions.

For one, the centrepiece of the talks – the defence partnership – has proven to be successful. The signing of the long-awaited Communications Compatibility and Security Agreement (COMCASA) will elevate the bilateral defence partnership and give India access to advanced U.S. defence systems. The new declarations of commitments with regard to the Indo-Pacific vividly demonstrate that China is still regarded as a regional disruptor. China’s activity in the Indian Ocean provokes closer cooperation between India and America in the maritime domain. New Delhi and Washington reiterated their shared principles for the region and agreed to start exchanges between U.S. Naval Forces Central Command (NAVCENT) and the Indian Navy in order to deepen maritime cooperation in the western Indian Ocean. So, it is obviously in the interests of both countries to ensure a good level of interoperability between the military forces. The decision to conduct tri-services exercises should definitely serve this purpose.

Another successful deliverable for India is Washington’s solidarity on the issue of terrorism expressed during the talks. The two sides “called on Pakistan to ensure that the territory under its control is not used to launch terrorist attacks on other countries and … bring to justice expeditiously the perpetrators of the Mumbai, Pathankot, Uri, and other cross-border terrorist attacks.” However, the changing contours of the Afghan crisis will probably make the U.S. reconsider its cooperation with Pakistan as well as the whole strategy towards South Asia declared by Donald Trump last year.

These days, it is also important to take into account the Russian factor in the evolving relationship between New Delhi and Washington. Moscow has always been an invisible part of the India-U.S dialogue, their defence cooperation, in particular. But for the last year the Russia factor has increased considerably due to the CAATSA legislation and its direct influence on all Russia-India military deals. Whether India is to be granted a special waiver or not remains an open question. This issue neither figured in the joint statement after the 2+2 dialogue nor was commented in-depth by the U.S. or Indian officials. The short remarks by Defence Secretary Mattis and Secretary of State Pompeo indicate that there is an ‘understanding’ of Indian concerns in Washington while the sanctions are not intended ‘to adversely impact India.’

The good news for Moscow is that India, which follows an independent foreign policy, is likely to retain its defence ties with Russia. Furthermore, according to media reports, New Delhi will probably continue negotiations with Russia on the S-400 deal. But, at the same time, Indian acquisitions of Russian origin military equipment are bound to shrink in size in the light of transaction difficulties and reorientation towards other suppliers. Even in the case of a green light from the American side, the smooth operational process of the Triumf systems purchase is not at all guaranteed. The payments on defence contracts have already become problematic as Indian banks are refusing to make remittances to Moscow for fear of potential penalties, forcing Russia and India to find alternate ways and accelerate their discussions on implementing rouble-rupee transfers. However, the problem is yet to be solved as Russian companies have not received the payments from their Indian counterparts since April.

Some Russian media observers are sceptical with regard to India’s capability to maintain a balance between the U.S., China and Russia. According to them, India partnering with ‘confronting states’ would be possible only in an ideal world. Opinions like this appear to be short-sighted, considering that, on several issues, the ‘confronting states’ are working productively together. An important thing to understand is that the view from Russia often comes through the prism of the U.S. Today the level of hostility in U.S.-Russia relations is so high that it, unfortunately, affects all the layers of the two societies, even ordinary people and their perception of the world affairs.

With the Moscow-Washington relationship in a downward spiral, Indian diplomacy will require a masterful approach in its interactions with the two. A closer engagement with the U.S. is a challenge for India, as this relationship is not likely to be a partnership of equals, for the foreseeable future. Washington is dominating the agenda of bilateral cooperation and even imposing pressure on New Delhi’s policies. The demands to cut off oil imports from Iran and halt the purchase of Russian military equipment are cases in point. On the other hand, the intensifying cooperation between Russia and China and the growing Moscow-Islamabad ties lead New Delhi to search for new sources of reliability.

India, on its way to become a global power, will likely have to follow a zigzag course, balancing between American demands, long-term friendship with Russia and its own strategic necessities in the neighbourhood and beyond. It will sign defence pacts and conduct military drills with both the U.S. and Russia (and other countries as well) in an attempt to seize maximum opportunities from its relations with global powers. Otherwise, putting all eggs in one basket might create overdependence on one partner and ultimately not serve Indian interests well.

Disclaimer: Views expressed are of the author and do not necessarily reflect the views of The Charticle or of the Government of India.

“Originally published by Institute for Defence Studies and Analyses (www.idsa.in) at IDSA”