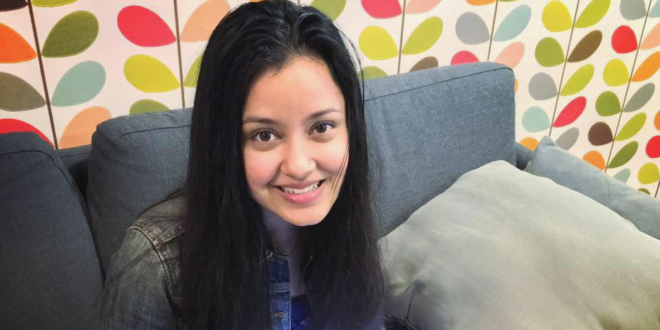 Farhana Rahman, a young Muslim woman from New York who is employed in an Israel based mobile app startup named Zula, posted a Facebook status full of boundless love for the state of Israel and its citizens Sunday. For those demoralized by the news these days, it is a true must-read.

“As I am typing this,” she wrote upon returning to the US from her second-ever trip to Israel, “my heart is still pounding quite hard, and there is still that yearning to go back.”

What followed was an exuberant post full of love for the Jewish state and its residents:

“Muslim me went to the heart of Israel, and exploded- with emotions. And with sentiment,” she declared.

“Because everyone loved me. Everyone went out of their way to love me. No one could dare say that my online friends in Israel aren’t real friends. Because yes they are. It’s insulting for me to even refer to them as my friends. It is also insulting for me to refer to them as my family. They are a part of me. My lifeblood. They collectively transformed me into a much better version of myself.”

Jews help people outside the tribe

She continued: “Many wonderful people traveled far and wide to see me. I didn’t want to bother anyone by asking for their time in my last-minute trip, but that didn’t stop them. They put their workloads and beautiful families aside, and came to see me and spend time with me in all crazy hours. I ended up falling for each of them even more than before, because they were all genuinely delighted over the fact that I was there. Probably even more delighted than I was.

“I don’t use the term ‘friendship’ lightly. I know I am saying it a lot here. I am far from popular, that’s for sure. But here’s how the culture in Israel works: If people know you, they love you. Well, you obviously have to be a good person. But anyway, everyone lifts everyone else up. You know those stereotypes of Jews only helping Jews and that’s why they are all successful and blah blah? Well I am solid proof that they wholeheartedly help people outside of the tribe as well.”

“And why don’t we all take a lesson from them?”, Farhana suggested, in a monologue that soothes hearts:

“Jews weren’t the only oppressed people that faced injustices in different points in time,” she observed. “Everyone was. And still is. Let us all help build each other up as they do!

“Everyone of all ages in Israel gave me exceptional, world class treatment. I got sloppy little kisses from infants, handmade presents from small children, endless praise from teenagers, saw the childish side of young adults, got treated to wonderful local eats by people my parents age, and listened to words of wisdom and got major hugs from people that were much older. Why am I saying this? To let you know that the people of Israel of all generations love, and love to be loved. And believe me… I didn’t only see a small handful of people in one town.

“Don’t listen to what the media, or what low res overly shared graphics say against Israel or the IDF (may God bless them.) Take everything you hear as inspiration to try to figure out what the real story is for yourself by getting straight to the source… Don’t blindly go by the ridiculous headlines and stories by the media.”

As for the “apartheid state” trope that is constantly repeated by anti-Israelis – Farhana had this to say:

“It’s almost crazy how many Muslim women I saw driving, shopping independently, studying, working, and enjoying life in Israel. Freedoms they couldn’t even dream of elsewhere in the Mideast. And yes, many of them were all burka’ed out to the nines. Also, it’s way safer to walk outside late at night in most parts of Israel, than in NY. Because the people are civil and good. If you reply with anything contradictory, I’ll simply ignore cause that won’t be worth my time.

“I didn’t think it would be possible for me to love Israel and her people more than before. But yep. This trip did it. Does that make me a Zionist? Probably. You will be surprised how many other Zionist Muslims I came across there. So bring it on haters, bring it on. I will stand at the front line for the chosen people. And after the smoke clears, we will cuddle and play board games together while enjoying bourekas and lemonade with mint.”

“I unfortunately didn’t get to visit Al Aqsa,” she was quoted as writing in a friend’s post, “because my Jewish friends were getting some mean glares from some of the older Muslims, and I didn’t feel comfortable to go because of it. But I was warmly welcomed to the Western Wall, and that felt just as sacred.

“I was not discriminated against at all by any means. If anything, I was given bigger discounts, and larger portions of meals because everyone was delighted to see that I was a Jew-loving Muslim. They went out of their way to make sure I was comfortable and enjoying my stay. Even strangers.”

It’s not easy being Israeli these days, with so much hatred and scorn being poured upon Jews globally. But even with just a few hearts as big as Farhana’s on the Jews’ side, the fight seems to be a lopsided one in the Chosen People’s favor.

– By Farhana Rahman. She is a young Muslim member of an Israeli start-up.

You can now Support The Charticle by making a small contribution: https://www.instamojo.com/@thecharticle/