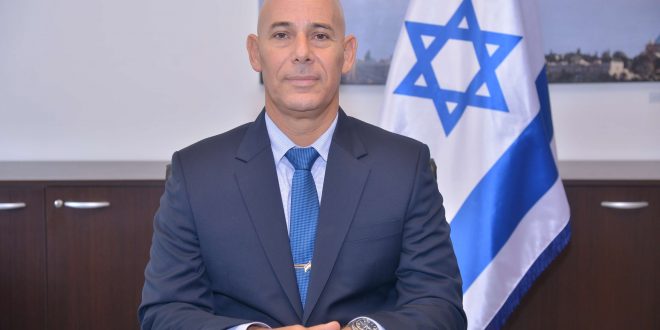 When it comes to India, Israel always sends its best and brightest, reflecting its commitment for Indo-Israel partnership. The new Israeli Ambassador to India & Sri Lanka, Dr. Ron Malka recently begun his tenure after getting a warm reception in New Delhi. India is Israel’s 10th largest trading partner. After the establishment of diplomatic relations between the two countries in 1992, civilian bilateral trade has grown to about $5 billion per year. We have all been charmed with bonhomie between Indian Prime Minister Narendra Modi and his Israeli counter part Benjamin Netanyahu during their recent trips to each other’s country. It was historic in its political significance, with Modi becoming the first sitting Indian prime minister to visit Israel. India and Israel has been actively strengthening partnership in defence, agriculture, economic ventures, people to people contact and a lot more.

Dr. Ron Malka as a new ambassador to India is seen as an important  appointment by Israeli Prime Minister Benjamin Netanyahu, who has chosen to send his own nominee instead of a career diplomat to India amid growing bilateral ties. On Thursday, Dr. Ron Malka presented the ‘Letter of Credence’ to President Ram Nath Kovind, at Rashtrapati Bhavan.

Speaking at the occasion, Ambassador Malka said, “I am honoured and privileged to be given this opportunity of taking the Growing Partnership between our countries forward. Our true friendship is based on our shared values as prominent ancient civilizations in the past, and leading democracies in the present. This month, January 2019, marks 27 years of Diplomatic Relations between India and Israel. Our countries are strategic partners working together to achieve prosperity, security and peace.”

On Indo-Israeli cooperation, Ambassador Malka added, “We are all part of the vision to double the farmers’ income within a few years. From security to food security, from education to innovation, I will make sure we do more in the areas of agriculture, water, defence, cyber security. I look forward to working closely with the people of India and the Government of India. I am sure that our close existing cooperation in every field will only continue to grow and flourish in the coming years.”

Dr. Ron Malka has an illustrious career. He graduated in Economics and Business Administration from Bar Ilan University in 1990. Later, he completed MBA in Finance and Business Administration in 1994 and PhD in Economics in 2004. He also served  in military service from 1983 to 2007 where he retired with the rank of Full Colonel. He went back to academics in 2008 and from 2008-2016 he was Senior Lecturer on Banking, Economics and Capital Markets at Interdisciplinary Centre, Herziya and The Academic Center, Netanya. He also served as the Dean of the School of Financial Markets and Banking at the Academic Center of Law and Business from 2016-2018. Dr. Malka provided financial advice and guidance to companies and institutions in the Israeli market, and international companies in public and private projects. In addition, he served as economic advisor to the Prime Minister’s commission to review the defence budget. Ambassador Malka has also served as Director (2008-2014) and Acting Chairman (2013-2014) in the Board of Directors of the Tel Aviv Stock Exchange.

India and Israel can count on each other for a host of reasons. There is a strong domestic consensus in India that strong ties with Israel are essential for Indian national security interests. Indian Prime Minister Narendra Modi deserves credit for investing personally in this relationship. The important partnership between India and Israel will surely further grow under Dr. Ron Malka.

– Shaurya Ritwik is the Founding Editor of The Charticle. He is a serial entrepreneur who works as a Business Consultant and Editorial Consultant with emerging business ventures, various corporations, and media agencies. He also serves as a Board Member in committees of various social organisations and projects for social development and policy making. He tweets at @shauryaritwik
Share