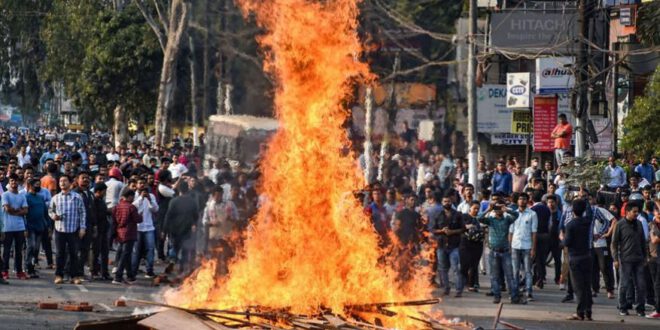 To understand the violent protests against The Citizenship Amendment Act we need to go back in history. It has been over 70 years since India was partitioned on religious lines because Muslim League believed that muslims can not co-exist with Hindus. The frightful vivisection of India in 1947 paved way for emergence of two nations: A secular India committed towards pluralistic traditions of its ancient civilization, and a radical Islamic state of Pakistan that stood against every idea of pluralism.

Persecution of Hindus in Islamic Republic of Pakistan and Bangladesh

With partition in the sub-continent, the status of its inhabitants changed abruptly and drastically both sides of the border. Muslims living in India were given equal status on par with the Hindu majority. Non – Muslims on the other side of the border in Pakistan were being subjected to forced conversion, sex slavery, and what not. Hindus, Sikhs, Buddhists, Jains, Parsis and Christians left behind in the Islamic state of Pakistan were made second class citizens for no fault of theirs, and were subjected to a relentless dehumanising religious apartheid.

During the 1971 Bangladesh war for independence, members of the Pakistani military and Razakar supposedly raped between 200,000 and 400,000 Hindu Bangladeshi women and girls in a systematic campaign of genocidal rape. During the war, a fatwa in Bangladesh was declared that the Bengali freedom fighters were “Hindus” and that their women could be taken as the “booty of war”. Imams and Muslim religious leaders publicly declared that the Bengali women were gonimoter maal (war booty) and thus they openly supported the rape of Bengali women by the Razakars.

Incidents of human rights violations against Hindus projected an increasing graph in Bangladesh and the Islamic Republic of Pakistan, where they are in a minority, but neither of the two countries nor the international community has been ever concerened. As a result of which the population of Hindus has rapidly declined in these two countries. Since 1947, the Hindu population in Bangladesh (former East Pakistan) has declined drastically from 31% to less than 9%, according to official government estimates. Dr Abul Barkat of Dhaka University says that Hindus will become extinct in Bangladesh in the next three decades if their population continues to decline at this rate. A report by the Hindu American Foundation (HAF), which works for the cause of Hindus, says: “The plight of religious minorities and atheists has become increasingly precarious as there has been a marked increase in religiously motivated violence over the past few years coinciding with the rise of domestic and international Islamist terror groups. The recent escalation in violence coincides with the growing power of domestic and international extremist groups, such as Jamaat-e-Islami (JeI), Jama’atul Mujahideen Bangladesh (JMB), Ansarullah Bangla Team (ABT), al-Qaeda in the Indian subcontinent (AQIS), and ISIS, among others.”

Similar is the case in the Islamic Republic of Pakistan. According to human rights group South Asia Partnership-Pakistan, every year, radical men abduct and forcibly convert around 1,000 Hindu women to Islam. Around 5,000 Pakistani Hindus are forced every year to leave Pakistan for neighbouring India to escape religious persecution, according to the Pakistan Hindu Council. Many of these Hindu and Sikh refugees who somehow escaped religious persecution are living in various camps across India.

What is The Citizenship Amendment Act and Why CAA?

The Citizenship Amendment Act, 2019 of the Parliament of India amended the Citizenship Act of 1955 providing a path to Indian citizenship for religious minorities from Pakistan, Bangladesh and Afghanistan. The religious minorities were listed as Hindus, Sikhs, Buddhists, Jains, Parsis and Christians. The beneficiaries had to have entered India on or before 31 December 2014, and have faced “religious persecution or fear of religious persecution” in their countries of origin. The Act also relaxed residence requirement for naturalization from 11 years to 5 years for these migrants. The ruling Bharatiya Janata Party promised in its 2014 election manifesto to provide a natural home for persecuted Hindu refugees.

India has a history of providing refuge to people of various faiths facing religious persecution. Parsis, a Zoroastrian community who migrated to the Indian subcontinent from Persia during the Muslim conquest of Persia of CE 636–651 when they were left with only two options – convert or die. Similarly, Jewish refugees facing religious persecution entered India through the sea route from Judea (Southern Palestine) and settled in India.

India, as the most powerful nation in South Asia has a moral duty towards the population of over five million Hindus, Sikhs, Jains, Buddhists and Christians which it heartlessly abandoned due to partition forcing them to live in oppressive Islamic states. It was indeed a mistake. This Citizenship Amendment Act only corrected that historical blunder. Large number of political parties supported its passage. This Act illustrates our century’s old culture of acceptance, harmony, compassion and dharma.

Last few days have seen violent protest against Citizenship Amendment Act across India, mainly from Islamic groups and minority institutions. The Bill however does not affect or diminish the status of Indian muslims. The CAB has nothing to do with any Indian citizen of any religion. The only scope of the bill is to aid persecuted minority refugees (worded as illegal immigrants in the bill) who are living in India for years and have not been able to become official citizens. The bill also does not address the issue of illegal Muslim immigrants like Rohingyas – its scope comes under the NRC.

Home Minister Amit Shah too removed these fears by asserting that Indian Muslims have nothing to fear. He added that no Muslim needs to be scared and no discrimination will befall them due to CAB as it has no connection with “Indian minorities”.

“There are Muslims here. They are living here without any problem.  I want to assure you today muslim brothers and sisters. No one needs to be scared. We will not discriminate. I assure you. We have no hatred towards Muslims. Do not create one. There is no connection of Indian Muslims with the bill”, Shah was quoted as saying.

Shah also answered the question, “why are Muslims excluded from the list of groups eligible for citizenship” by pointing out that as the bill only covers minorities from Pakistan, Bangladesh, Afghanistan and as Muslims are not a minority in these countries, they are not included.

Harish Salve, one of India’s biggest names in national and international law, has stated that the Citizenship Amendment Bill is not anti-Muslim and it does not violate the Articles 14, 15 and 21 of Indian constitution as being claimed by naysayers.

The protests in the North-East are against giving citizenship to any Bangladeshi, Hindu or Muslim, which is driven by demographic fears. These concerns are being addressed outside CAB, and the protests can be handled logically.

The most violent protest and vandalising of public property was seen in West Bengal where Mamta Banerjee’s government had given free hand to the rioters. The protest in Jamia University, Aligarh Muslim University and other educational institutes also seemed to be well coordinated and politically motivated against present government. The mob burnt buses, police vehicle and public property and openly called to wage jihad against non believers. The students should refrain from becoming pawns of unsocial elements, this uprising against the state without argument merits is uncalled for.

Democracy ensures everyone right to protest against the policies of elected government but violent protest is totally uncalled for. Such actions need to be dealt according to law. Violence as a means to dissent should not be accepted.

An MLA of Aam Aadmi Party, Amanatullah Khan was found provoking people on religious lines. Across the border, deliberate attempts are made to make this a Hindu-Muslim issue, and a large section of Muslims protesting against CAA are complying to it. The raising of anti-Hindu, Khilafat slogans etc in education institutions are paving a way for another partition in this country. It is high time to confront this reality and check this rapid radicalisation among our youths. The same section failed to ignite chaos after Triple Talaq Bill, abrogation of Article 370, Ram Janmbhoomi judgement etc as a result of which CAA is being targeted as another attempt to create nationwide unrest. It requires motivated blindness, when plight of Hindu (and Indic) populations in the three Islamic countries is completely ignored and a humanitarian effort to protect them in pluralistic India is deemed to be Islamophobic and Indian government fascist.

To deprive Hindus (Indics) fleeing religious persecution from Islamic states in the only country they have heritage and dharmic ties is unpardonable moral lapse. India being a pluralistic country is not only for Hindus but for Hindus there is only India. To protest against their claim in their natural homeland is an open display of Hinduphobia. Now the global players and an entire ecosystem is after this bold move by Indian government. To deal with upcoming chaos is not a challenge in front of government only, but also citizens. We are going through a phase of transition, the road is not smooth ahead and we Indians irrespective of religion, caste, linguistic lines need to stick together. The Citizenship Amendment Act is not against the soul of our nation, but to support or protest against it will be a litmus test for our own morality.

– Shaurya Ritwik is the Founding Editor of The Charticle. He is a serial entrepreneur who works as a Business Consultant and Editorial Consultant with emerging business ventures, various corporations, and media agencies. He also serves as a Board Member in committees of various social organisations and projects for social development and policy making. He tweets at @shauryaritwik