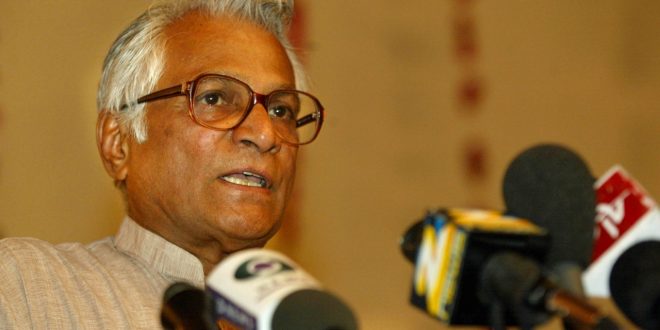 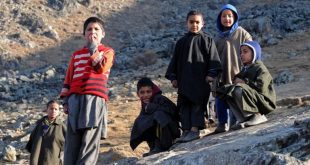 With the passing away of the veteran socialist leader George Fernandes, India has lost a political colossus. George was a politician with a difference. He had the ability to stand alone, take a position, however extreme, and sustain that position. He was a political worker, an extra-ordinary leader, a powerful Trade Unionist, a Parliamentarian that many would dread to face and above all a dissenter. In the early 70s, when I was a student, George was one of the most charismatic speakers, much wanted to address campus audiences. My familiarity with him started at that time and I had an opportunity to work with him both in opposition and in Government.

George saheb once narrated to me his story, the entire tale of 1967 South-Bombay elections. That election would be an education for any student of psephology or electoral politics. Shri S. K. Patil was the unquestioned leader of Mumbai, then Bombay. He was a Union Minister and Congress party’s Treasurer. He had won his South-Bombay seat several times by large margins. Nobody believed that Patil could ever be defeated, till a 36 year old President of the Bombay Taxi Union, George Fernandes, announced that he would challenge Patil in the elections. All the opposition parties supported George. George’s first task was to make people realise that Patil was not invincible. Posters, banners, stickers on the taxies, outside apartments were put up, all carrying one line “Patil can be defeated”. Once the campaign picked up and became the talk of the town, the media asked S. K. Patil for his comments on the same. Patil inappropriately replied “Only God can defeat me”. Prompt came the response campaign of George. The next slogan was “God does not vote, only you do. So, only you can defeat Patil”.

The voters dislike arrogance and defeating Patil became the flavour. With the support of the opposition and the Unions, George secured a victory and entered Parliament. He quickly made a mark as a Parliamentarian, a great speaker in at least seven languages. A phenomenon very rare in India.

JP Movement and the Railway Strike

Post Mrs. Indira Gandhi sweeping to power in 1971, George became an active part since 1974 of the JP Movement. Bihar had always been an important political constituency for both the socialists and George Fernandes. He concentrated on his Trade Unions and became the head of the Railway Unions. In 1974, he called for a Railway Strike for the working conditions of the railway-men. This has been one of the most tense Trade Union agitations ever in India. The entire country was hearing the slogan “Rail ka chakka jaam karenge”. The events of 1974 and those which followed culminated in the imposition of Emergency.

The Emergency witnessed multiple reactions. Most institutions caved in. This included the judiciary, the media and the civil services. Only some outliers in these were the dissenters. Many political workers got scared and preferred inactivity, some even issued statements supporting the Emergency. The bolder political opposition workers protested and went to prisons. George Fernandes believed in militant opposition to the Emergency. Many felt that the idea of a militant opposition to the Emergency was misconceived but George was a man with his own mind. He believed that this was the only course. His opposition was shattered and, along with his colleagues, he was arrested and prosecuted.

George’s idealism overtook political pragmatism when on 19th January, 1977, Mrs. Indira Gandhi announced the holding of the General Elections. All the political prisoners in Tihar Jail had a meeting. George was in Ward No. 17. Some of us were in Ward No. 1. We all were allowed to assemble in Ward No. 2 for political consultations. While everybody else favoured participation and contesting of elections, George was a dissenter. He wanted to boycott the 1977 Elections. He believed that this was going to be a make-belief farcical election through which Indira Gandhi would earn legitimacy and continue her dictatorship and hence the opposition by contesting must not give legitimacy to the Elections. Though in a hopeless minority, George stood to his position.

Janata Party was formed immediately and it decided its candidates and George was chosen to contest from Bihar. He declined to sign on the Nomination Papers. It finally took Morarji Desai, who came to the Tees Hazari Courts (where George used to come for his trials), with a set of Nomination Papers, to get George to sign them so that he could contest from prison. George eventually yielded and signed his nomination papers. Results were declared and George won the Election by a huge margin. The Janata Party formed the Government with Morarji Bhai as the Prime Minister. A perpetual rebel, George’s first reaction was to decline to join the Cabinet. He again misjudged the public mood. I remember George being gheraoed by 500 political workers at New Delhi’s VP House and being compelled to yield in the face of hostile slogans to join the Cabinet.

The fall of the Janata Party Government was a Chapter in the life of George that he would like to forget. He delivered in Parliament, the most eloquent defence of the Government, only to quit the next day under pressure from his other socialist colleagues Raj Narain and Madhu Limaye.

While in the opposition, George spent the rest of his next decade in opposition championing the issues of the farmers, Trade Unions and finally Bofors. He was one of the leading campaigners against corruption in the Rajiv Gandhi era. His attacks on the Government were perhaps the most aggressive ones. He had built a reputation as being both a master of facts and languages.

Defence Minister and the False Allegations

In the NDA Government, headed by Mr. Vajpayee, George as the Convenor of the NDA was one of the architects of alliance formation. Even his worst critics would not attempt to level allegations of corruption against him. Yet twice as a Defence Minister, once during the Tehelka Tapes and second in relation to the CAG Report relating to the purchase of the Coffins, false allegations of corruption were levelled against him. A Commission of Enquiry in the Tehelka Tape issue vindicated George. The Coffin gate Report was an absurdity. Metallic coffins were called costlier by comparing their costs with wooden coffins. Two unequal commodities do not cost the same.

George led the most austere of lives. He washed his own clothes, cleaned his own utensils. He never owned a Television, till a well-wisher insisted that he needed to have one. His books and files lay scattered on the floor in his house till some friends made arrangements to get him some ordinary book shelves. He took up causes which nobody espoused and pursued them with all vigour. Ministers were scared of facing the wrath of his attack when he was in the Opposition. But eventually his health took better of him. The slowing down of his mind and various faculties could be seen towards 2003-04. He still had full comprehension but that aggression was lacking. I noticed this during a GOM in the last days of the Vajpayee Government.

During 2005 Bihar elections, Advani ji on behalf of the BJP announced Nitish Kumar to be the Chief Ministerial candidate of the NDA. We, in the BJP, felt that this was logical and would also help us in unseating Lalu Yadav’s regime. A murmur of protest came from George. When I went to meet him, I realised, because of failing health, he had not realised the full implication of his reaction. His parliamentary tenure in Lok Sabha ended in 2009. He needed an official accommodation for some more time. Nitish Kumar graciously put him up as a candidate in a bye-election for Rajya Sabha where George entered the Upper House for the first time.

His oath taking showed his state of health. He could politically no longer contribute. He needed help and assistance at every stage. The tiger had been tamed but his escapades would be remembered for a long time. George Fernandes was a parliamentarian for several terms. He was a Union Minister thrice. But he will be remembered for several agitations he lead, several positions he took and several causes he represented.

George Fernandes was the last of the veteran Lohiaites. Dr. Ram Manohar Lohia, George Saheb’s mentor represented the anti-Nehru, anti-Congress face of Indian politics. After the 1962 General Elections and the China war debacle, Dr. Lohia gave to this country the famous slogan “Congress hatao desh bachao”. This led to an anti-Congress alliance. The first step was that Dr. Lohia, Acharya Kripalani and Deendayal ji became the joint opposition candidates in three bye-elections to the Lok Sabha. The then Jana Sangh President Dr. Raghu Vira lost his life in a road accident while campaigning in these elections. However, in the post-Dr. Lohia era, with the emergence of the BJP as the principal pole of Indian politics, many Lohiaites shed their inhibition and started doing political business with the Congress. The Left was not far behind. They called it re-polarisation. One honourable exception was George Fernandes. He was a born Lohiaite and he died as one. His anti-Congress moorings were never compromised.

– Arun Jaitley is a senior BJP leader who served as Minister of Finance, Minister of Defence and Minister of Corporate Affairs in Modi Cabinet. This post was originally published on his Facebook page.
Share