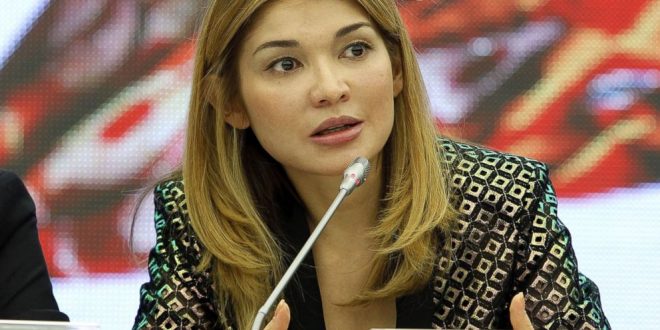 In a statement, Uzbekistan’s prosecutor office said that Gulnara Karimova, the elder daughter of former President Islam Karimov has been sent to jail after a top court testified that she had dishonoured the guidelines of her house arrest. The statement reiterated that on March 5 Tashkent’s Yashnabad District Court had passed a ruling on behalf of the Interior Ministry demanding Karimova to be sent to a jail to fulfil the rest of her five-year house arrest. She had intentionally neglected the terms of her house arrest twice, once when she left her residence to meet her daughter Iman, and the other when she used internet services for unspecified purposes.

Meanwhile, Karimova’s lawyer Gregoire Mangeat tweeted a picture stating that two police officials “forcibly removed” her from the apartment where she was living in Tashkent and was taken to an unknown location. He also wrote that Uzbekistan’s authoritarian government is using “totally arbitrary methods” and “continue to exert psychological and physical pressure on her to force her to withdraw her appeals and abandon all her rights and property in Switzerland”. Uzbek authorities have been lobbying to freeze Karimova’s properties worth over $1 billion throughout the world, including in Switzerland, Russia, France, Britain and many more.

Karimova previously played an instrumental role in Uzbek politics when she had the posts of permanent representative to the United Nations in Geneva and ambassador to Spain, and was projected by several international political analysts to take over the presidency from her father Islam Karimov. But in 2014 she was isolated by her father and family after being arrested by security forces on charges of financial misconducts, and was never seen in public, not even during the funeral of her father in September 2016.

In 2013, Swedish media reported that Karimova had misused her position in assisting as a caretaker for global telecom corporations seeking to invest in Uzbekistan, which eventually led to judicial inquiries in Sweden, Switzerland, the US, the Netherlands, and many other countries. She was heavily criticised for massive bribery and extortion involving global multinational companies, as she was notoriously named as a “robber baron” by a leaked American embassy cable. In 2017, Karimova was awarded a 10 years sentence in jail for bank scam and money laundering but in 2018 it was altered to house arrest.

Karimova’s father Islam Karimov was the top leader of the Communist Party in Uzbekistan during the period of Soviet Union, and after it fell in 1991 he quickly became the President of newly independent Republic of Uzbekistan and ruled the country with an iron fist for almost 25 years. Until her father was alive, Karimova was an eye-catching trendsetter, known for big fashion shows and sugary pop music videos. But since Shavkat Mirziyoyev took over the leadership of Uzbekistan in 2016, he has acted heavily on Pro-Karimov leaders and his relatives and has vowed to bring modern reforms contradicting Karimov’s model of governance.

Previous Pakistan and the anatomy of terror
Next Surabhi Tiwari, new sensation in B-town has an inspiring life story as well