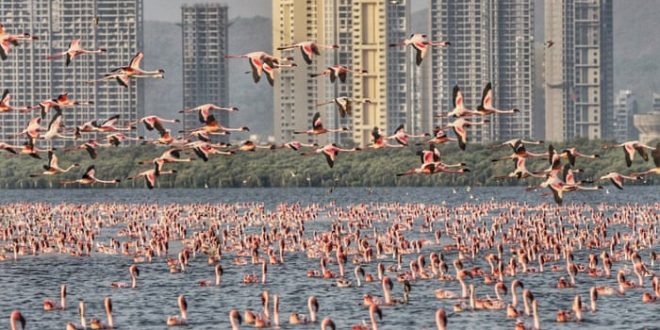 (Over 100,000 Flamingos Reportedly Descend on Mumbai Amid India's Strict Coronavirus Lockdown, 30% surge as a result of change in environment)

FOOTPRINTS OF COVID-19 ON ENVIRONMENT

Coronavirus is the major challenge of the century which has spurted across the globe. The world has come to a standstill. The pandemic has deeply impacted every aspect of this planet in its own way, be it mankind or the environment. The new infectious respiratory disease originated in Wuhan Hubei province, China in December 2019, which was named COVID-19 by WHO. This fatal and ironically short-lived virus is threatening lives, economy and also has a profound whack on the environment. Majorly positive impacts have been observed on the environment; it is like on the silence of humankind, nature is resetting itself. The lockdown has aided the environment in such a way that other life forms are flourishing that were suppressed in the noise of human beings and their needs.

Scientists have observed a major downfall in air pollution all across the globe during this substantial lockdown concurrently. Many videos have been flooded on social media and news channels of wildlife reaching out in streets of metropolitan cities. Due to less or no crowd at places, pollution level be it air, water, soil, and noise has dropped significantly. On the one hand, industrial water demand has declined in this period while on another side, domestic water consumption has increased. Also, medical waste has shown drastic arise during this pandemic. Therefore, the rise in medical waste and their decomposition needs proper addressing.

This article seeks to understand the impact of coronavirus pandemic on the environment, wildlife, and how we can take this as an opportunity to rethink and reshape our future to attain sustainable goals.

Air pollution an “invisible killer” has been with us from the industrialization era. The industrial and vehicle emissions are considered as the primary source of pollution. This period of the pandemic has shut down various industrial activities along with fewer transportation which has slashed down various greenhouse emissions and also improved the quality of the air we breathe.

According to the World Health Organisation (WHO) annually, around 3 million people are choked to death from maladies associated with air pollution. Furthermore, air pollution is attributed to cause respiratory infections, ischemic heart disease and stroke, lung cancer and asthma. An important point to note is that the death rate due to COVID-19 is significantly more to people with chronic respiratory and cardiovascular disease.

The European Space Agency’s (ESA) Sentinel 5P satellite that is dedicated to monitor the atmosphere and to map the traces of gases like nitrogen dioxide (NO₂), carbon monoxide (CO) and methane (CH4) that affects air quality. The readings which were taken during late January and early February 2020 indicated the levels of NO₂ over the cities and industrial areas in Asia and Europe were significantly lower than in the same period in 2019, by as much as 40%.

Similarly, the novel coronavirus pandemic appears to be a blessing in disguise for the Indian subcontinent. The nationwide lockdown implemented by the Government of India has significantly changed the air pollution levels, especially in New Delhi, where a 50% reduction was observed.

The global improvement in air quality will be beneficial to the general public, but especially to the people that are susceptible to respiratory illnesses. It seems like this is the first time the planet is witnessing such a drastic change in the global air quality and gives us an opportunity to think for a future where we can develop low carbon economy and focus on alternative source of sustainable technologies like electric or battery-operated transportation system rather than combustion of fossil fuels.

The pandemic has significantly reduced the air pollution levels, and we are witnessing clearer skies, water bodies and breathe fresh air which has indirectly affected the wildlife across the globe. While the human population is locked inside their homes, the animals are taking prefect advantage and exploring the streets and waterways of the cities that are making headlines all across the media.

The cities that were once busy are lulled because of the contagion disease. The Bosphorus in Istanbul is one of the most active marine routes, but now with a lull in traffic and fishing activities, dolphins have been spotted swimming near the banks and jumping in the waters. Also, the encounter of wild boars, big cats and Kashmiri goats in the streets, flourishing of the pink flamingos in their lagoons, nesting of curly pelican pairs, the revival of the vulnerable dugongs (sea cow) are some of the benefits that animals are reaping from this lockdown, and for how long they will enjoy this, it’s up to us.

On the contrary, the pandemic has also raised concerns over the increased poaching activities of endangered species. After the surge of six black rhinos killing in Okavango delta of north-western Botswana, the government workers have been evacuating the rhinos form their place. The reduced human tourism and lack of forest rangers make it easier for the poachers to move unseen and do such an insidious crime.

The coronavirus, which was thought to be originated from a local sea market in China, has thrown a spotlight on the global wildlife trade. The impulse for wildlife as food, medicine, skin and ornamentals has always attracted illegal trading and trafficking, which creates a breeding ground for diseases and the opportunities for viruses to become zoonotic.[2] Moreover, China has introduced a ban of all farming and consumption of live wildlife, which is expected to become law later this year. Paradoxically, even if the rules are imposed strictly, the loopholes including trading for medicine, pets and scientific research, persist. Hence, all eyes narrow down to how the wildlife protection law will address this loophole.

Impact on Waste Consumption and Resources

With the lockdown all across the globe, industries were shut, school and colleges were closed, there was an enormous increase in home working which led to increasing in domestic water demands and dropped industrial water consumption. Having said that this absenteeism could also affect operations of drinking water and also the wastewater and their capability to operate and maintain the structure adequately, thereby increasing the risk to public health.

According to the facts, 60 to 70% of water is utilised in the agriculture industry and the other small portion by other human activities. During this pandemic people are taking extra care like frequent hand washing has been observed, showering twice a day, sanitisation also consumes a lot of water and in addition to its domestic consumption has also been increased due to home working.

Talking about water bodies all over the globe, several reports suggest that the water pollution level has declined significantly. Clearer water is being observed after a decade. This is exemplified by the clearness of canals in Italy as there is less water traffic to muddle at the bottom. Moreover, in India, Ganga water at Haridwar has observed to be potable after decades. These facts have proven to be inspiring as today not only the scientific community, but also common mass is looking at the efforts for maintenance of their respective surroundings.

The pandemic has expanded the production of various medical materials such as gloves, masks or PPE, etc., gloves and masks are not only used in medical care but also by the common mass. This state of affairs has created the deluge of medical waste which has never been seen before. Moreover, this medical waste has to be disposed of according to guidelines which further increases the demand for landfills or other such systems for proper disposal.

Also, as the earth is healing itself during this pandemic, the impact on water is still a concern. On the one hand, we see clearer water bodies and in other places, a huge number of gloves and masks have also been reported seen floating on them which is a serious concern with respect to the purity of the water bodies and marine life.

Putting the glance on plastic waste, its numbers are also touching the sky. Plastic is already very popular for packaging. Having this pandemic, the number has shot up as the online demand for products has grown rapidly. The sales have multiplied to such an extent that Amazon has announced to hire 100,000 new employees. With these tons of plastic usage can be calculated. On one side this news again helped mankind, employment rose up but on the other side of the coin nature is still a sufferer.

The corona pandemic has shuddered the entire planet with fear and forced us to rethink about the lifestyle, having said that this period has also given hope for climate change after a decade. As every cloud has a silver lining, and this during this period, we also witnessed some exceptional changes that we could only imagine. The improvement in the air quality, water bodies, and wildlife are the signs that brought a smile on our faces and accepted the fact that Mother Nature is healing herself. Along with these positive sequels, on the other side of the coin, we are producing added waste, which requires proper management.

Additionally, for the first time, the whole community looks for alternative solutions to every problem that has been surfaced during this pandemic leading to the genesis of creativity. Moreover, international communities are coming together, working collaboratively towards solving this petrified trouble. Hence, the whole humanity across borders irrespective of geography is experiencing that together on this planet, humankind can achieve milestones.

– This article is co-authored by Jaya Manocha and Rohit Nautiyal,  (M.E-Biotechnology) BITS-Hyderabad

Previous Should India be renamed as Bharat?
Next Covid-19 vaccine development regulations