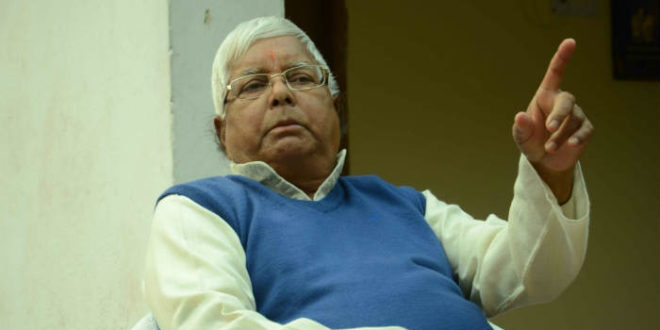 Jungle Raj in Bihar : The Making and Unmaking of Lalu Prasad Yadav

Lalu Prasad Yadav, the Bihari political phenomena who up-set the order and shook Bihar to its very core. He was like any other, born at Phulwaria in Bihar to Kundan Rai and Marachhiya Devi. A bachelor of Law and Political Science waiting for the right moment to jump in politics. And thus began the making of Lalu Prasad Yadav and the unmaking of Bihar.

His journey that witnessed the fall of Bihar started in 1970 when he entered in student politics as the General Secretary of the Patna University Students’ Union (PUSU), and became its President by 1973. Even in his college life he had a knack and good eye for political power. His real journey started when he joined Jai Prakash Narayan Bihar movement in 1974, which paved his path towards Janta Party’s leaders to be the winning candidate in the 1977 Lok Sabha election from Chappra, just at the age of 29, but due to fall of Janta Party Lalu joined Janta Party (Secular) led by Lokbandhu Raj Narain only to lose in the re-election. But he rose again as he won Bihar legislative assembly in 1980 and 1985, and he was on his way to be the leader of the opposition in Bihar assembly in 1989.

Lalu Prasad Yadav surely knew how to climb up the ladder. In 1990, Janta Dal came in power and Lalu Yadav was nominated by Deputy PM Devi Lal, and Mr. Yadav found his way to victory through the Internal poll of Janta Dal Party MLAs, and that’s how Lalu Prasad Yadav, with the support of Yadavs, Muslims, and other backward communities became the Chief Minister of Bihar, and thus began the story of unmaking of Bihar.

Lalu Prasad Yadav upraised in power because the people of Bihar trusted him, they trusted him because they saw him as one of their own, a hard working person belonging to a poor family making his way out of poverty and trying to better the condition of other backward communities. His election front was based on development of the backward communities, and an overall development of Bihar, nothing but false and empty promises. Lalu caught the eye of the nation after the fodder scam. Out of the many scams that he committed or have been accused of, this one made a blunder of ₹9.4 billion from the government treasury of the Indian State of Bihar. He did bettered the condition of few people, but only relatives or people close to the family. Bihar lived in the tyranny of Lalu from 1990 to 2005, as he and his wife continued to rule and dry the wealth of the common people, with a small interval of 7 days in which Nitish Kumar came into picture (Nitish kumar was elected as CM of Bihar from 3 March 2000, to 10 March 2000). His reign came to an end on March 6, 2005 and Bihar took a sigh of relief from a decade and five years of lawlessness, corruption, money embezzlement and destruction of the integrity of Bihar.

In the tainted tenure, which slowly distorted the integrity of Bihar, that changed the word Bihari to a sense of vulgarity, Bihar faced an increment in crime rates. His tenure was an end game for Bihar, he was a Yadav who surely knew how to milk his cow, but never fed any hay. Few of the scams during Lalu’s rule:

Lalu stayed in the picture of Bihar Politics with RJD with the support of Yadavs and Muslims. But to see, he was just merely taking a rest from action as he jumped back into the picture with Nitish Kumar, as these two formed a governing alliance in Bihar on Febuary 22, 2015. Politics is arcane for some to understand as there were many questions on how two people who loathed each other ended up in each others arm, some also called it a lovers quarrel. Nevertheless, Lalu launched his son Tejaswi Prasad Yadav as the deputy Chief Minister of Bihar, in Nitish Kumar government, and he did ran the office for sometime before Nitish Kumar broke ties with RJD and ran in the arms of BJP to form another governing alliance in Bihar. A true example of teenage break up, patch up and again break up. It was not only that Lalu’s family was out of the picture of the governing alliance but Lalu was also convicted and jailed again in Fodder scam case on 23 December 2017. Well, as they say karma always come just like justice.

With Lalu Prasad Yadav finally out of picture from the Bihar politics, as for now the question awaits that is it just another return to the pavilion only to come back to score sixes or is it the clean out.

Nevertheless the whole country had their eye fixed at the politics of Bihar, as it sure matches the standards of the episodes from The house of cards. The rise and fall, the break up and patch up and the scams to be in power was more like a script of a modern day drama based on politics. Lalu stands to be the one of the most astonishing political icon, as he went from powerless to powerful only to be powerless again. And as always Patliputra witnessed the greatest change of tides of power.

Previous Fruits are a natural source for enhancing inner and outer beauty
Next United States suspending military equipment delivery, most aid to Pakistan

Dipesh Agarwal, Founder of The Kalimpong Store in an exclusive interview with The Charticle  discussed …