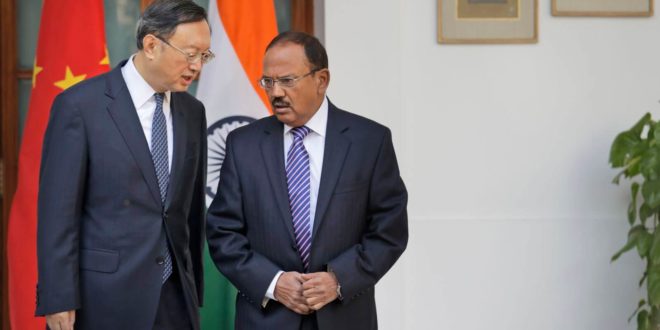 NEW DELHI — India and China on Friday discussed ways to prevent a repeat of a recent face-off between their armed forces at a Himalayan plateau where their borders meet and agreed that resolving their boundary disagreements served the interests of both countries.

Relations between the two Asian giants have often been strained, partly due to an undemarcated border. They fought a monthlong border war in 1962 and have been trying to settle the boundary since the 1980s.

The two sides agreed Friday that pending the final resolution of the boundary issue, it was necessary to maintain peace and tranquility in the border areas, a statement by India’s External Affairs Ministry said at the end of daylong talks.

The Indian side was led by National Security Adviser Ajit Doval and the Chinese delegation by Special Representative Yang Jiechi. The two had met in Beijing in July on the sidelines of a meeting of the Brazil-Russia-India-China-South Africa (BRICS) summit.

“The talks were positive and focused on bringing out the full potential of the closer developmental partnership between the two countries,” the statement said. “They re-emphasized their commitment to achieve a fair, reasonable and mutually acceptable solution to the India-China boundary question at an early date.”

The latest confrontation took place where India and China’s border meets that of Bhutan. It started in June when Indian troops moved in to stop China from constructing a road in the Doklam region in Bhutan. Both countries agreed to pull back their troops on August 28.

The border dispute continues to bedevil relations between the giant Asian neighbors — armed with nuclear weapons and with 2.6 billion people between them — despite a recent warming of economic relations.

Friday’s was the 20th meeting between the two sides on the border issue since mid-1980s. (VOA)